The Absence of Mark Manders

Museum of Contemporary Art Tokyo will reopen from June 1 by advance reservation only.
Every visitors are required to purchase advance reservation tickets. Tickets are not available at the museum ticket counter.
Session after reopen: Tue.1 June - Tue.22 June
The Museum will open everyday during this period.⇒More details

Sculptures looking as though a mere touch would bring them crashing down,
objects of obscure age and origin, a studio bearing the evidence of departed occupants, long dark corridors, ...
Welcome to the world of Mark Manders, a mixture of calmness and unease. 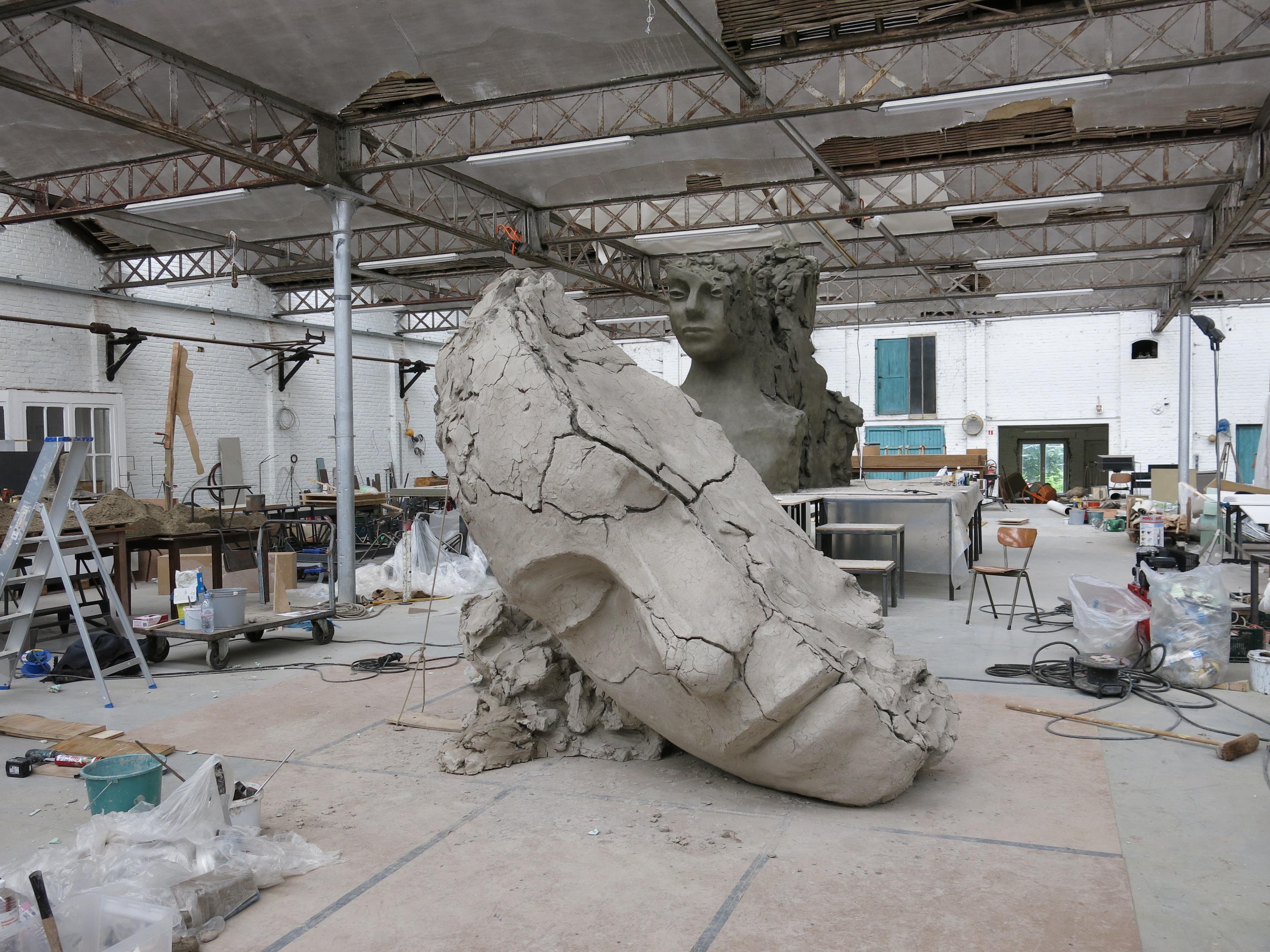 The Museum of Contemporary Art Tokyo (MOT) is delighted to present the first solo exhibition at a Japanese art museum by Mark Manders, a Dutch artist who occupies a unique position in the contemporary art scene.
Mark Manders was born in 1968 in Volkel, the Netherlands, and currently works from his studio in Ronse, Belgium. In 1986, at the age of eighteen, he had a sort of epiphany that inspired his “Self-Portrait as a Building” concept. This has informed his work ever since, utilizing the form of a "building" for over thirty years as the framework for a self-portrait of an imaginary artist named, like the artist himself, “Mark Manders.”
During this period, the artist has produced a series of sculptures and objects to be placed in the rooms of the building, presenting them as installations. By means of the overall layout of these works, he is constructing a human figure, which results in the creation of a world with a unique and extremely large framework. Based on this fictional framework, the creative world of his works displays an unparalleled vision, and attracts worldwide acclaim, as does the quality of each of the individual works, probing deeply into the concept of sculpture. For this solo exhibition, Manders conceived of the whole exhibition as the installation of a single work, the building.

Individual works are assembled from images based on art history and personal memories, from statuary and words, and from a variety of furniture and other objects. To the viewer, they invoke complex emotions, distort the sense of time, and encourage thought and introspection. Each independent work is fascinating in isolation, but being part of a larger framework reveals new aspects that are even more captivating. Each work manifests as a part of this imaginary building, where the real Manders who produces the works and the self-portrait of the imaginary Manders intermingle, fading and reappearing as they lure viewers into a fictional space. At the same time, individual works are interchangeable—like words in a sentence, they can be swapped around according to the room and the configuration. Because of that, the imaginary building as a whole resembles an automatic mechanism undergoing constant modification and updating. The “Absence” in the title is one of the keywords behind all of Manders’ works. It carries multiple meanings, including reference to the stillness and the sense that what can be seen in an installation is a moment frozen in time, to the traces of departed occupants, and to the way that agency flits between the real artist and the imaginary artist. It can also be considered to denote the fact that the work is autonomous, capable of maintaining an independent existence even if the artist is absent. Manders’ world continues to enthrall those who enter it, encouraging them to reconsider their thoughts regarding the meaning of art, and their thoughts regarding time and experiences of human life and imagination.

This solo exhibition is a highly valuable opportunity to gain a deep appreciation of Manders’ work and to observe its unique structure. Viewers are recommended to hone their senses and take their time to encounter this world to the full.

Meticulously crafted works—"Frozen moment"
Each and every work by Manders incorporates a multitude of elements, such as his personal memories and lifestyle, and fragments of art history from a number of periods and regions. Some works appear heavily weathered, with fragile material likely to collapse at any moment, while others have the moist gloss of freshly-sculpted clay. There are works combining parts in inconceivably tense arrangements, and works with strangely uncomfortable scale. In addition to the mixture of calmness and unease, from these carefully calculated and meticulously executed works comes the sense that everything froze in place at the same instant, stopping the flow of time. This world, which the artist describes as a “frozen moment,” incites a longing for an unchanging world without decay, leaving a powerful impression on viewers.

Intriguing installations at the heart of Manders’ practice
Each of Manders’ individual works is viable in its own right, but the works are all connected to the idea of a "building" as the self-portrait of an imaginary artist named “Mark Manders.” In that sense, a viewer standing in front of one of these physical works is simultaneously in the imaginary room that is a part of the building. This space where fact and fiction overlap is one of the great attractions of Manders’ works. The artist began working on his ideas for this exhibition back in March 2019, and conceived of the whole of the exhibition gallery space on one floor at the museum (1,000m2) as a single work. Installation is a key part of Manders’ practice. His world can only be appreciated to the fullest extent by actually entering these installations.

Venice Biennale exhibit presented for the first time in Japan
The exhibition incorporates the well-known works that have been a consistent feature of the artist’s recent major solo exhibitions. These include his representative works Nocturnal Garden Scene and Mind Study, which MOT is arranging to borrow from museum collections in Belgium and the Netherlands to be exhibited in Japan for the first time. Mind Study was part of his presentation at the 55th International Venice Biennale in 2013. In addition, Manders plans to produce one of the room motif installations that he professes to be very fond of.

Viewers who enjoyed the interplay between the works of Manders and Michaël Borremans in their dual exhibition at the 21st Century Museum of Contemporary Art, Kanazawa (19 September 2020 – 28 February 2021) will be fascinated to see Manders’ works from a different perspective. The differences in approach between the two exhibitions results in a rare opportunity for a multifaceted exploration of the work of Mark Manders, leading to a deeper understanding of the attraction and significances of his work.

Born in 1968 in Volkel, the Netherlands, and currently lives and works in Ronse, Belgium. Studied design at the Arnhem Academy of Art and Design from 1988 to 1992. Since 1986, his works have been based on his “Self-Portrait as a Building” concept. Creating sculptures and objects to be placed in the rooms of this imaginary building, he presents his works as a series of installations. In 1988, he collaborated with Roger Willems to launch Roma Publications. In addition to Manders’ artist books and exhibition catalogues, this publishing company produces books for other artists, and makes the notional newspapers that are one of Manders’ representative works. He has participated in many international art festivals, including the São Paulo Biennale (1998), Documenta 11 (2002) and the Venice Biennale (2013). Solo exhibitions include an exhibition that toured Europe from 2008 to 2009, an American tour in 2011, and, more recently, an extensive retrospective at the Bonnefantenmuseum in the Netherlands (2020). He has also produced monumental outdoor sculptures for the Public Art Fund (2019, Central Park, New York, USA) and Rokin Square (2017, Amsterdam, the Netherlands). His main exhibitions in Japan have been the inclusion of Tokyo Newspaper in “Territory: Contemporary art from the Netherlands" at Tokyo Opera City Art Gallery (2000), participation in the Aichi Triennale (2016), and “MICHAËL BORREMANS MARK MANDERS: Double Silence” at the 21st Century Museum of Contemporary Art, Kanazawa (2020).

Every visitors are required to purchase advance reservation tickets.
Click here to reserve a ticket.

Embassy of the Kingdom of the Netherlands, Mondriaan Fonds

Now available in the Online Shop.