The Museum of Contemporary Art Tokyo is delighted to announce the upcoming solo exhibition “Actions + Reflections” by leading Japanese media artist collective Dumb Type. The exhibition, which marks the 35th anniversary of the group’s formation, will feature an updated version of the 2018 exhibition at the Centre Pompidou-Metz (curated by Yuko Hasegawa) with several new works as well as an extensive archive of the group’s past performances.

Founded in Kyoto in 1984 by students of Kyoto City University of Arts, Dumb Type is a multi-media performance artist group centered on Teiji Furuhashi (1960–1995) which garnered attention for its highly inventive, non-hierarchic pieces which develop as collaborations between members who each pursued their own individual artistic style. Within the superficiality, despair and seduction of 1980s Bubble-era Japan, the group was highly sensitive to a societal “lack of any awareness in spite of an overabundance of information” (=dumb) and developed artworks with a sharp, critical nature. As a reaction against the textual emptiness of many language-driven performance groups, Dumb Type pursued a word-less approach (=dumb, mute) and composed works based around sound, video and installation pieces as well as the performers’ reactions towards them.

Based in Japan, Dumb Type became world-wide pioneers who employed a revolutionary visual language and philosophy to express their visions of the “posthuman,” born from new relations between body and technology.

Featuring several large-scale installations, this comprehensive exhibition offers an invaluable introduction to the works and artistic activities of Dumb Type, a group whose unique vision lives on after Teiji Furuhashi’s death thanks to newly joined members and veterans like Shiro Takatani or Ryoji Ikeda, and which continues to influence young artists throughout the world.

1 Critically acclaimed solo exhibition updated with new works
The exhibition at the Museum of Contemporary Art Tokyo constitutes an upgraded version of the critically acclaimed Dumb Type solo exhibition at the Centre Pompidou-Metz (2018), featuring additional new works and access to the Dumb Type performance archives. Coinciding with the 35th anniversary of Dumb Type’s foundation, this exhibition provides an invaluable opportunity for audiences in Japan to experience six of the group’s large-sale installations as part of a show.

2 An overwhelming spatial experience full of character
With works such as Playback, (based on Pleasure Life, performed during Teiji Furuhashi’s lifetime) the piece pH, a massive recreation of the same-titled installation work from Dumb Type’s early period; LOVE/SEX/DEATH/MONEY/LIFE, based on the play S/N and the exhibition “The Human Condition” from 1994; Teiji Furuhashi’s LOVERS (2001/second edition) (exhibited until 19 January, 2020); as well as MEMORANDUM OR VOYAGE, which reconstructs three performances created after Furuhashi’s death, this exhibition offers an incredible spatial experience with exceptional sound design.

3 An overwhelming spatial experience full of character
The exhibition presents an extensive archive created with the help of researchers, former and current members that will offer a comprehensive overlook Dumb Type’s creativity and its message – preceding the advent of the internet age – both before and after the death of founding member Teiji Furuhashi. An illustrated catalogue with many photographs of the group’s artworks will be published in conjunction with this exhibition.
(publisher: Kawade Shobo Shinsha / ¥3,000 Languages: Japanese-English bilingual Date of Issue: December 2019)

＊ Small modifications are scheduled to take place during the exhibition period.
The exhibition and included artworks may be subject to change.

Founded in Kyoto in 1984, Dumb Type is composed of artists from diverse backgrounds — dance, theater, music, video, design, architecture, programming — all contributing to a great variety of stage and installation productions over the years. Derived from the diversity of its members and the different media employed by the group, Dumb Type’s works range from art exhibitions to performances and live music concerts. Realized with a different lineup of members each time, their pieces address a variety of social issues related to contemporary society. Dumb Type toured their early multimedia works Pleasure Life (1988), pH (1990-1995) and S/N (1994-1996) worldwide before the untimely death of the group's artistic director Teiji Furuhashi, a prominent HIV/AIDS activist, in 1995. Since then, Dumb Type has continued under the direction of Shiro Takatani, creating works such as OR (1997-1999), memorandum (1999-2003) and Voyage (2002-2009).

Following the large scale solo exhibition in the Centre Pompidou-Metz from January to May 2018, the group are currently planning a new performance for the first time in eighteen years, to debut at Rohm Theater Kyoto in March, 2020.
http://dumbtype.com/

Playback, 2018
Created in 1989 for the touring exhibition Against Nature: Japanese Art in the Eighties, the installation Playback, based on the 1988 performance Pleasure Life, features 36 wireframe stands for revolving acrylic discs with model rockets hovering like record needles. This remade 18-stand soundscape installation plays a mix of audio tracks from the LP record era — music from the early '80s by Dumb Type's Toru Yamanaka and Teiji Furuhashi, odd vocal variations on English language lessons, greetings in 55 languages from the data disc launched into space on the 1977 NASA probe Voyager — as well as new field recordings. 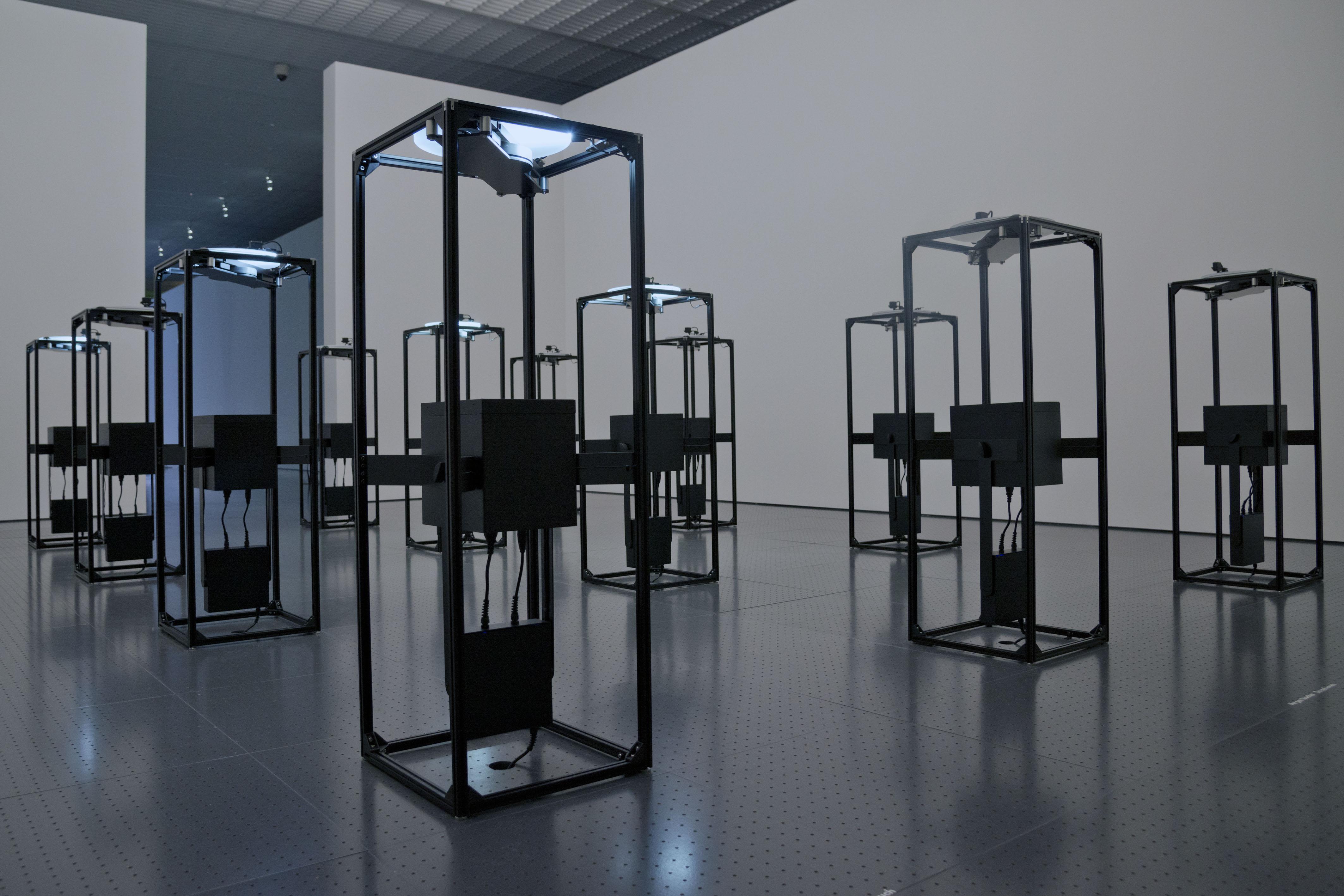 pH, 2018
A recreated version of the massive stage mechanism from the early '90s performance pH, which transposed the 13-level acid/alkaline chemistry scale into 13 "phases" — question/answer, image/word, fact/fiction, extension/compression, public/private, real/ideal, offense/defense, exertion/relaxation, production/reproduction, male/female, culminating recursively in an end/restart. Whereas the original version had two computer-driven crossbeams that forced the performers to drive or jump out of the way, here one lone LED crossbeam sweeps back and forth illuminating an empty performance floor like a scanner in a giant photocopier. 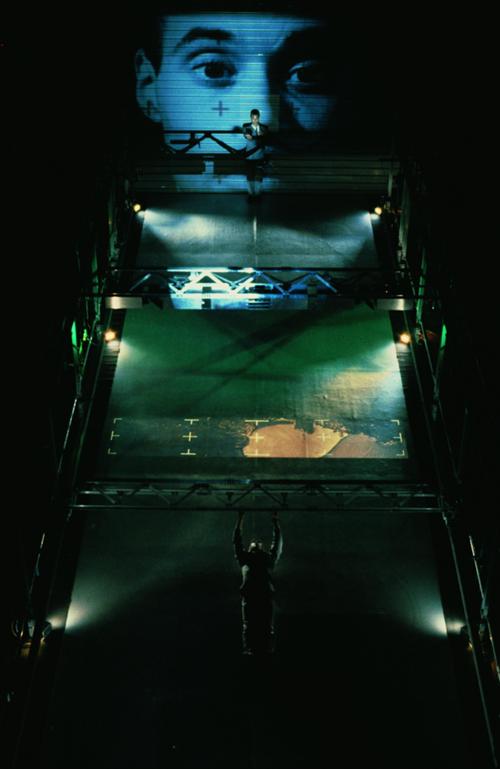 LOVE/SEX/DEATH/MONEY/LIFE, 2018
Created for the exhibition Of the Human Condition: Hope and Despair at the End of the Century in 1994, this video installation comprises visuals also featured in the stage projection of the performance S/N that same year. In this controversial work, Dumb Type applied the concept of the "signal/noise" ratio from communications and electrical engineering to contemporary social issues of gender, HIV/AIDS, sexualities, race, nationality, minority- and sex -discrimination, going beyond the borders of performance art to embrace a broad range of cooperations and involvements with various communities. 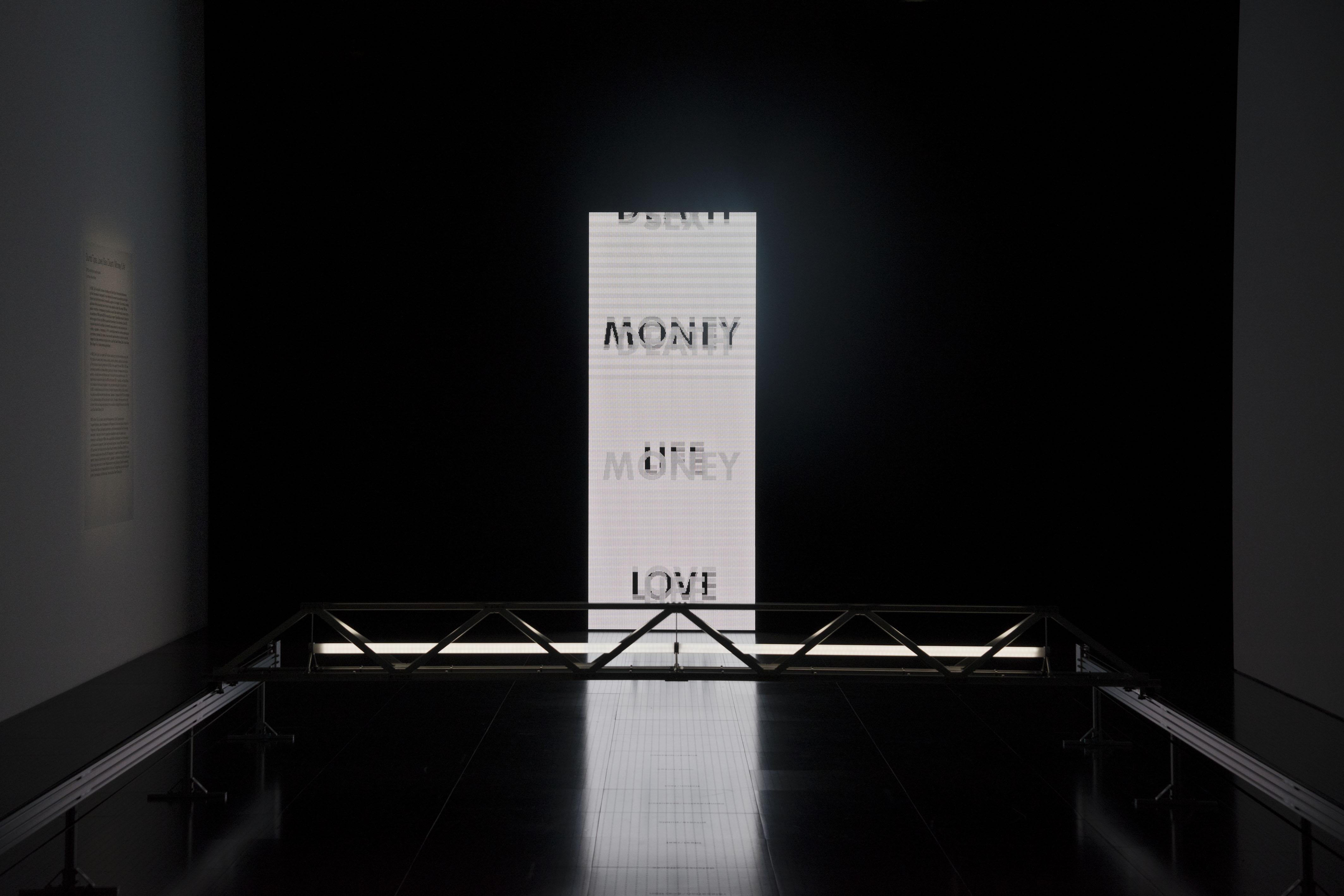 MEMORANDUM OR VOYAGE, 2014
This latest Dumb Type video installation, premiered in 2014 at the Museum of Contemporary Art Tokyo, combines striking scenes from the three past performance works OR (1997), memorandum (1999) and Voyage (2002), re-edited together with new video material.
OR is a "grey humor" reflection upon the zone between life and death, envisioned as a white-out blizzard that blurs the contours of the self, and was suggested by concept notes written for a "future production" by Dumb Type core member Teiji Furuhashi just before his untimely death in 1995: Explain issues surrounding the border of life and death, and how technology is now involved in defining this border . . . how much science can mediate this border, how much our mind can control this border . . .
The title OR conjures up associations with words like Operating Room and Operations Research while also signifying a binary choice between alternatives.
memorandum was conceived as a compendium of memories of 16 Dumb Type members, compressed and intricately restructured in cross-sections along a timeline to form a linear maze. The stage is spanned by a large translucent screen, showing the performers standing close behind as clear silhouettes that diffuse as they move away, mirroring memory’s function as the basis of experience even as it erodes moment by moment.
Voyage features a full-screen projection of the entire text of Darwin's 1839 "The Voyage of the Beagle," overlaid with the route of the HMS Beagle. A lower expanse of vertical scan lines indicating uncharted territory transforms into a world map as the voyage progresses, sending an early 21st century message of discovery to the children of the future. 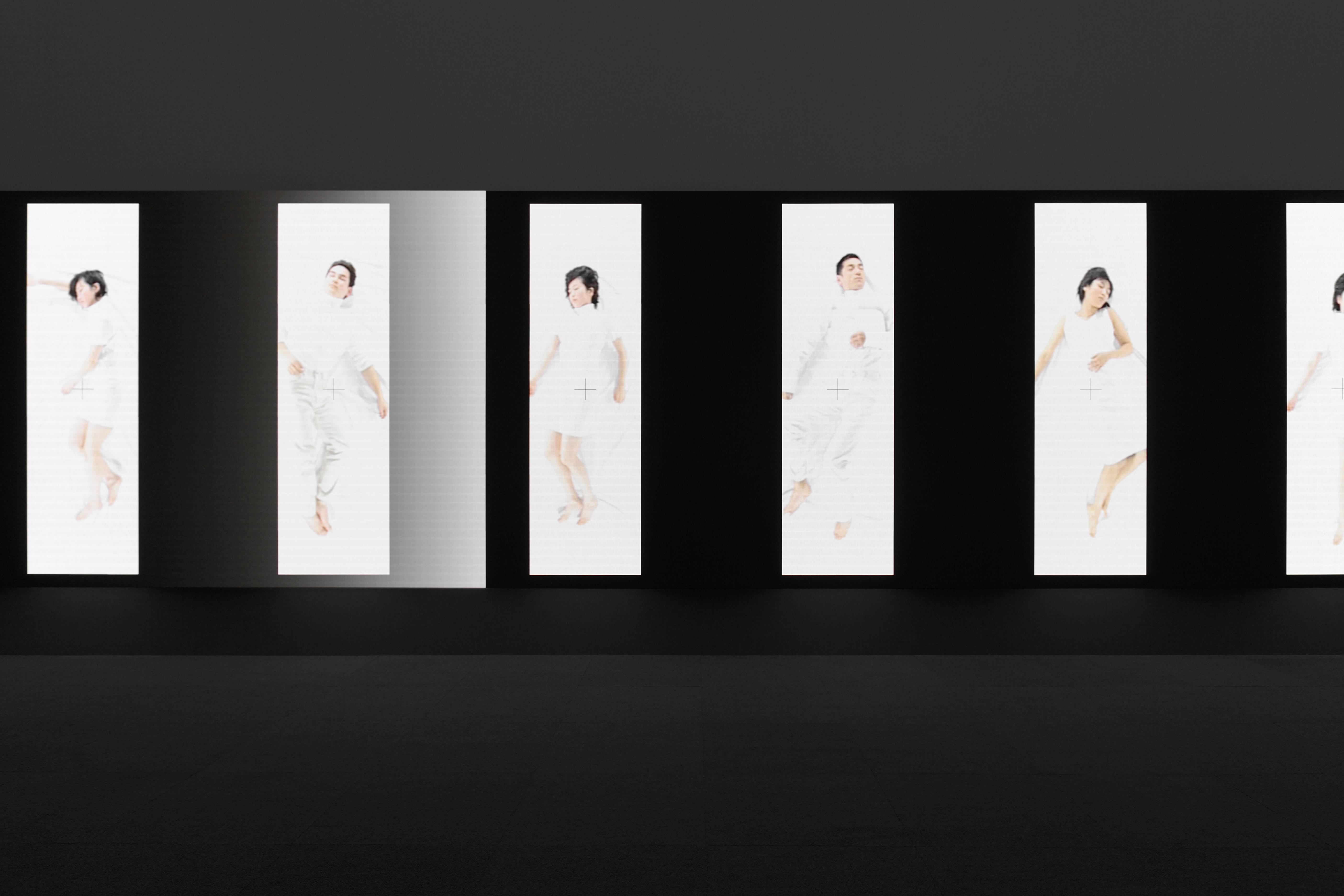 The last work by Dumb Type's Teiji Furuhashi, who died of HIV-related septicemia in 1995 at the untimely age of 35, the installation LOVERS may be seen as a flip-side to the performance S/N of the same period. Created over a one-year collaboration with Canon ARTLAB, which approached Furuhashi to do a solo piece, the first version in 1994 toured internationally before being included in the permanent collection of the New York Museum of Modern Art. A second version, produced for the 2001 opening of the Sendai Mediatheque, was again exhibited internationally and ultimately donated to the National Museum of Art, Osaka, in 2017. 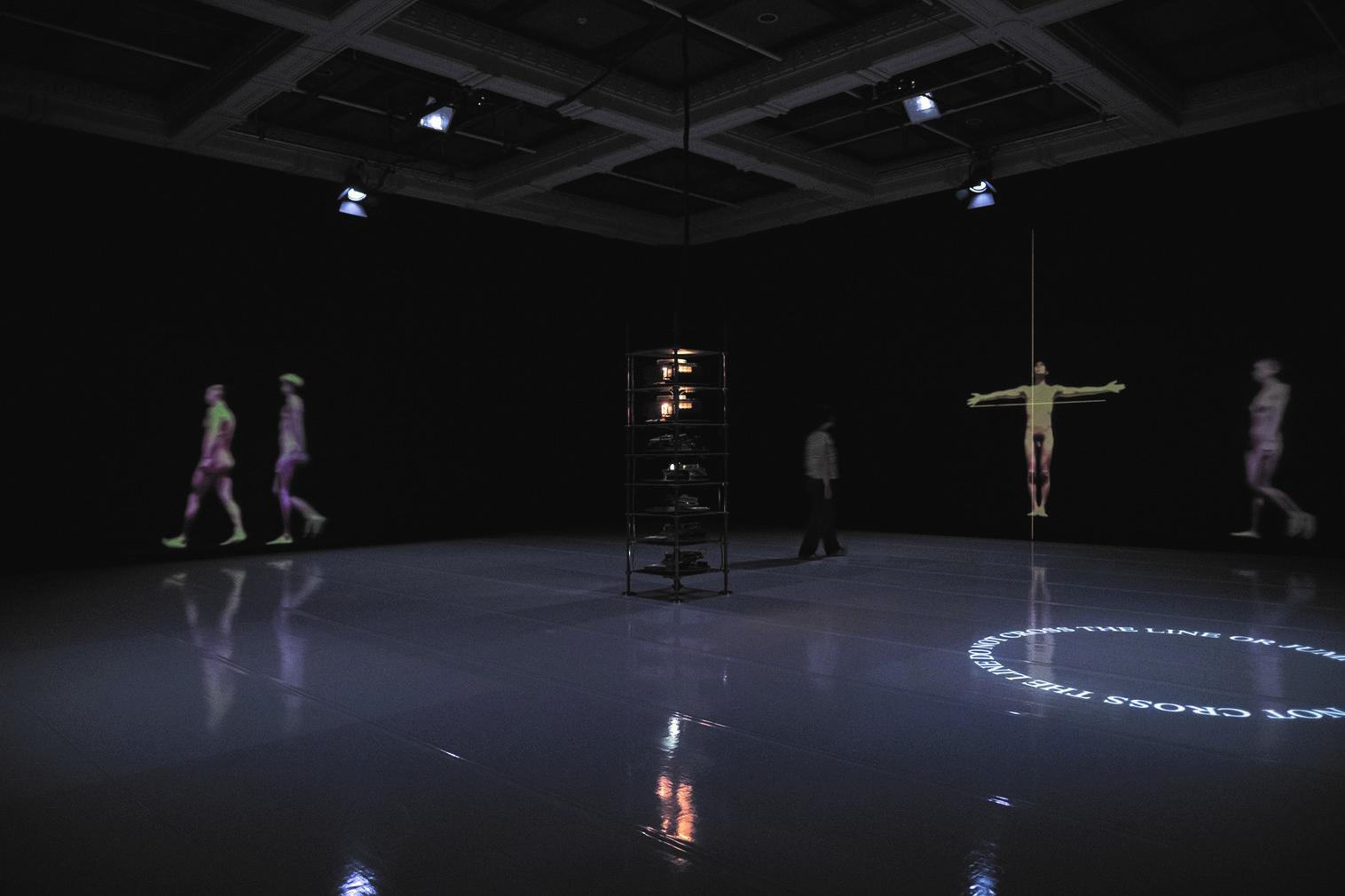 * ( ) Price for a group, over 20 people
* Free entry to MOT collection ticket holders.