Ay-O: Over the Rainbow Once More


Discover the vibrant world of Ay-O through this retrospective of his work, covering his entire career, from his early works to the present day.

Born in Ibaraki Prefecture in 1931, Ay-O, together with Masuo Ikeda and others, was active in the Demokrato Artists Association during the fifties, attracting notice for his brightly-colored oil paintings. In 1958 he moved to New York, where he used tangible objects to try to create dialogues with the world that can perceived through the senses, resulting in his 'finger boxes', in which a finger is inserted into a hole in the side of a box to feel the material hidden inside, installation works that incorporate their surrounding environment, etc., going beyond the confines of the painting to produce works that appeal to the five senses. During the sixties, when everyday things or actions were translated into art, Ay-O received attention for his pioneering installations that he called 'environments'. As a member of the Fluxus movement, which went beyond the narrow divisions of genre to include musicians, poets and artists, its activities extending to performances and printed works to establish the foundations of today's diversity of art, he worked with such people as Yoko Ono and Nam June Paik. Finally, he rebelled against the concept of creating works consisting of lines, instead filling his motifs with the colors of the spectrum, from red to purple, giving birth to his 'rainbow' works, becoming famous throughout the world as the 'rainbow artist' subsequent to his exhibition at the 1966 Venice Biennale. Ay-O's struggle with the rainbow was expressed in a variety of genres including prints, paintings and installations, and still continues to the present day. This is the largest-ever exhibition to be held of his work, presenting numerous paintings from the rainbow series, an interactive installation that people are invited to appreciate through touch, a new work that is 30 meters in length and contains a rainbow consisting of 192 colors, a 300 meters long banner that was suspended from the Eiffel Tower in 1987 and recordings of his performance works. The gallery will overflow with Ay-O's optimistic world. 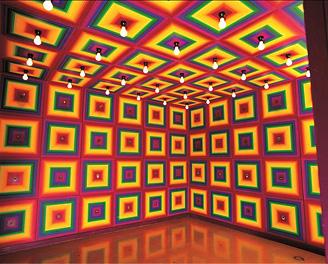