Exhibition Outline
The Museum of Contemporary Art Tokyo is pleased to announce a solo exhibition this fall of the work of Rebecca Horn, a major representative of the contemporary German art world. This will be the first large-scale exhibition of her work in Japan.

Horn has been known for her performance works involving the wearing of feathers, horns, and mirrors. Since her participation in the 1972 Documenta show in her 20s, she has energetically pursued a range of artistic activity that continues to tackle new territories of art, one after the other--beginning with kinetic sculpture as well as film, and continuing on to capture the fascination of a great number of people--audiences with an interest not only in visual art, but that include film and dance enthusiasts as well. Her performances, which began in the late 1960s, sought to expand the functions of the human body, improve communications with others, and develop a rapport with mythical animals and nature. The devices that attached to the body and enhanced its physical perceptions were first used in performance, then eventually developed into independent, kinetic-mechanical sculptural works. Later, in what amounted to over ten years of life in New York, Horn undertook the production of highly narrative, full-length films, and incorporated the sculptures and movements from her earlier work into this new context of film, transforming their significance. Since the 1980s, after moving back to her home country of Germany, Horn's work that directly confronts modern historical issues has been acclaimed for its ability to tie together personal experience and social memory. One early example of this work involves the conversion of the interior of an abandoned tower in the city of Münster into a piece that utilizes its history as the subject matter. In recent years, Horn has been working on large-scale installations and stage designs using music composed by Hayden Chisholm. She has also made, without the use of tools, a series of unrestrained drawings that emphasize direct human movement, developing a completely free mode of creation.

This exhibition is a full-scale presentation of Horn's work. With all representative film footage, which includes the performance records from the 1970s and the full-length narrative films from the 1990s, as well as installations and two- and three-dimensional works that she has been producing since the 1990s, a total of forty exhibits allows one to trace the development of relationships between the various media in which Horn works. The flow of various invisible energies of humans and nature are transformed into visible form via movement, light, and the traces of such. The exhibition promises to be an unparalleled opportunity to experience this highly original, creative trajectory in MOT's vast space.

Highlights
Long-awaited, first solo exhibition in Japan
Because of her early international activities and through her performances and documentaries, Horn's name has become quite well known in Japan. In spite of this, opportunities to see her actual work in Tokyo have been limited. For the first time, the full range of Horn's oeuvre covering nearly all of the genres in which she works will be actualized here in Japan.

Important performances from her early period
Problems with the new sculptural materials Horn employed after completing art school led her to spend time in a medical isolation facility. Since then, the exploration of expanded physical functions and the recovery of communications with others have been pressing and constant matters of interest in Horn's artwork. In these valuable documentary films of Horn's performances, we are able to learn of how the artist and her friends wore perception-enhancing devices made of materials such as fabric and feathers, and developed performances that explored the relationships between themselves and their surrounding spaces.

Quietly moving machinery
The soft feathers, binoculars, musical instruments, and such are objects that arouse all five senses, as they continuously move quietly and intermittently, as if mediated by humans. From the most delicate of bells to the great spectacle of a grand piano, each of the objects speaks to a great variety of sensory and imaginative experiences.

Full-scale, feature-length films with subtitles can be appreciated at one's leisure
During her stay in the US in the late 1970s, Horn wrote screenplays for and directed several full-length films. In them, she inserted her previous performative and sculptural works, and explored the changes in meaning that arose from the new contexts. Her films, each over one hour long, are of epic scale, and feature prominent cast members such as Donald Sutherland, Geraldine Chaplin, and the cellist Mischa Maisky. One can spend an entire day enjoying these films at the Museum.

New installations by the artist as poet
Horn has also been active as a poet, and recent years have seen publications of her poetry. One can directly experience her collaborative work with the musician Hayden Chisholm, which features Horn's poetry in a space-transforming installation with music.

Recent paintings
Although she is better known for her three-dimensional works, in recent years Horn has worked on a painting series entitled "Bodylandscapes." These vivid, unrestrained paintings, which are made without the use of any tools, directly communicate the movements of the body. They easily transverse various genres, and provide us with a breath of the artist's freedom in developing her creativity. 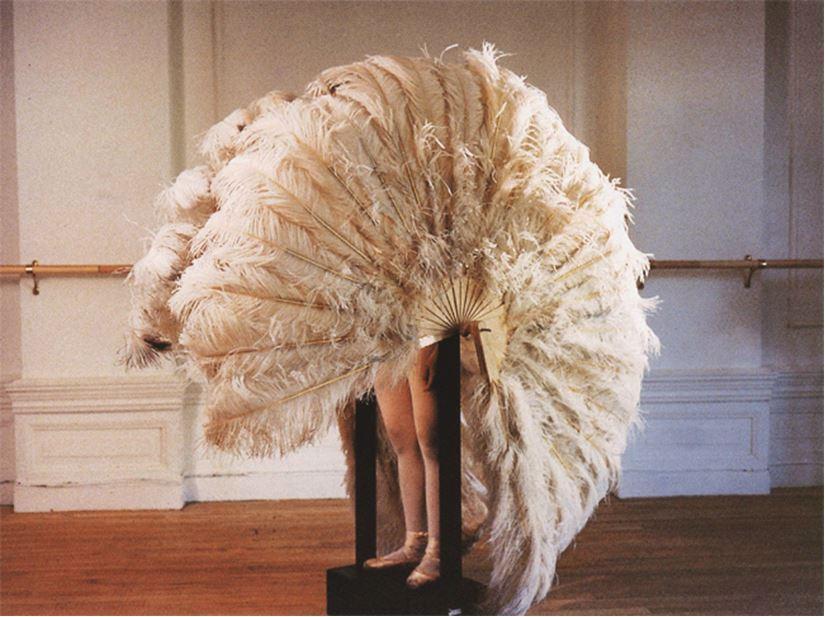